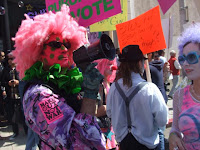 The above images give a clear visual to the differences between Saturn- (tradition) and Uranus (breaking out of the norm)........ On election day here in the USA these two planets will be in exact opposition for the first time in forty-five years.

Saturn is in an earth sign- adding to the 'solidness' of its force, and Uranus is in Pisces- a water sign. Ever try to 'hold' water? To say things are going to be high strung and out-there is to read the cosmos correctly.

The stare down will effect everyone- in the world......not just the outcome of the election.

How much we hold on to our structures that give us false (its all false) security will determine how painful it is when they are ripped away and replaced with something very unfamiliar. OR if we look at it from another view- How much we need to 'act up/out' verses being responsible will determine the level that authority comes down on us. Authority can be many different people- 'God' is considered the highest being in charge for many of the faith........so maybe God's voice is going to come across loud and clear for the flocks that are tuned into that channel. God can also be our very own 'higher mind'.

Actually the 'highest' level of using these planets would be to blend the strengths that each of them have to offer. Especially if they happen to trigger a personal planet in your chart. The opposition takes place @ 18 degrees 57 mins. So if you have planets in that degree give one degree on either side- the shock waves will be felt even more so. The possible growth with a shift could be a welcomed thing.

Everyone has a VIRGO / PISCES axis in the chart. They are the area to ck out- so that you are privy to the oncoming battle. If one house is weak or been ignore, now would be a good time to do an over all assessment of how you 'feel' about the issues that house represents. If things are just fine and dandy then set up to build on top of what already is going on.

In a general sense- Saturn is about being mature and Uranus is about trying something that you've never done before. We have to use some reason here- but if you've spent your entire life being 'reasonable' you might be compelled to go a bit wacko.......go hug a tree in your three piece perfect cut suit.

Reaching out with ones compassion is always a good thing unless its to a known bloodthirsty who just escaped from prison. That would be misplaced idealistic energy to say the least. Pray for them from afar- that's using sensible Saturn with compassion. What i am getting at is not too far in either direction right now might be the best place for most of us.

I know concerning the Presidential ballot, you do have to commit to someone- just don't think they are going to make you 100 percent happy.

Not going to happen in this election. Not with Saturn and Uranus in opposition. Every sinner can become a saint and every saint can become a sinner. We all have a little bit of good and bad in us- makes us interesting.
And what appears to be a 'solid' thing can suddenly crumble in an earthquake.

If the baby breaks out of the playpen there is really no telling what she/he will get into.

its a sort of koan. you can spend the next forty-five years figuring it out.

I set her upcoming Solar Return chart for Washington, DC.

VERY IMPORTANT YEAR for her.

Maybe she'll go back to Alaska and work hard- or maybe she'll be the first female VP. I tend to think the latter- and have already posted that prediction.

She is born on a 'master number' day- it is her birthright to go where others never have. To do the 'impossible'.

The other stand outs- I see in the chart are:

SR Mars is exactly conj. natal Moon- ( that can represent much travel - and /or a move) its in her 6th so its connected to work. She's going to be very very busy in 2009- wherever she is. Mars also is the natural ruler of her 4th house (traditional)- and Solar Return Mars is also in an exact sextile (within mins) to SR Venus. - Venus rules her MidHeaven- (both natal and SR) so the 'move' can be connected to work.

She has Solar Return Moon in the sign of Virgo in the SR first house-@ 10 degrees, another sign of - work-work -work. It is also at the midpoint of her Natal first house Uranus/Pluto. - Pluto ruling the 4th, Uranus ruling the 7th- Home and Partnership is going to have many changes this year. Its a huge juggling act. That SR Virgo Moon is trine her Vertex- - fate. Destiny at work- w/ her work- and with her creative energy and Kids...(natal vertex in cappy in the 5th).

The Solar Eclipse that happens in Jan 2009- is @ 6 Aquarius- it will activate and highlight her work area. It will set off what is 'possible' in the early part of the stellium in Aquarius. - the midpoint of Solar Return Mar/Juno-Jupiter. It will bring her much chance to be progressive w/ her beliefs. (Jupiter) and action (Mars)........also - Jupiter rules her 5th house- so her children will bring her much joy and much challenges. She's becoming a grandma - and Mars happens to also rule her 9th house- (grandma's house) and Natal Jupiter will be in it.......joy. this is a joy for her.

She has FIVE kids. So life in general is demanding - in 2009- it will be even more so. She is going to be the most 'unusual mom' - ( SR Moon conj. Uranus) - When has any child ever said in our American history- "my mom is Vice-President of the USA"........ never. So its first house- and its image- and its a new and an unusual one. Could be many stops and starts of figuring out how to balance it all.

The other huge stand out in the Solar Return is Juno (marriage asteroid) is exactly conj. Jupiter in the SR-@ 8 degrees Aquarius and its in the 6th house of Work- health.... The north node is one degree ahead of it. So it is her mission (nnode) this 2009 year to have new contacts- of a partnership level- new friends- and I think the Jupiter will mean deeper faith- and much travel overseas.

The Lunar Eclipse that happens in feb 09- is conj. her SR Asc. EXACT.

Her world will change in 2009- bigger than she ever dreamed of.

I know the 'polls' say this and that.........I don't believe polls- so my analysis - is based on the astrology- and also still on the belief that the swearing in chart that mirrors the McCain/Palin Composite- (but in opposite placements of sun/moon)

I still have never forgotten that Obama made his announcement to run for office during a VOC moon. In Scorpio. And has nothing going on in his 10th house or his SR chart to make me believe he will prevail. I DO think he will win the popular vote- I think McCain will win the Election.

The Saturn opp. Uranus on election day- I have long thought will spark a - PAPER VS COMPUTER debate- like we've never seen before. Computers will fail. It will be chaos.- and no matter WHO LOSES- and I think they both lose- because how you can think anyone who wins is winning w/ the state of our country I don't know.

I think they all are crazy for spending MILLIONS - to 'win' a thankless job. I hope like heck there aren't riots. I have only thought that there might be in the last week- as the press has practically ended the election before it started- and sworn Mr. Obama in.

That Saturn opposition to Uranus - is UNEXPECTED. So- if the press has pushed 'polls' and the voting turns out different- how are people not going to feel freaked out?

From here on out- primary season is limited to SIX MONTHS.
Everyone gets the same amount of money- you run out, you are out. And we have limits on the amount you can have.

Thank Goodness its almost over.