You are happy star dust! 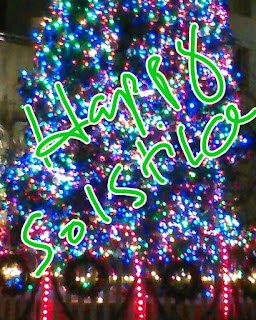 The Sun, Jupiter, South Node, Saturn, and Pluto are all gracing the sign of Capricorn! And its the week of a Solar Eclipse (new moon with sunglasses on!) at just past 4 degrees Capricorn. The Eclipse is Christmas night (PST).
Christmas Eclipse

YOU will take your holiday fun seriously, because Jupiter is hanging with this eclipse and Uranus (the planet that lovvvvesss surprises!) is trine it!  BE HAPPY.  IF you aren't, listen to this song:

(and yes, I am aware that someone in that video wasn't so happy at the end of his life, but ... its still a great song!! )

And the theme song for the eclipse is:

Its just the law of the Universe at PLAY!

Ram Dass just flew over to the other-side...... and he will be sending thought waves to your dream time, so that you don't fear death- or change, coz he knows.... its all OK!  I had to chuckle to myself when I saw that he'd crossed.  Eclipse energy always bring the news of the big influencers shedding the body. The  Planet or sign usually gives a clue to the category of who is about to make headlines because they flew the coop of the body. Jupiter rules spiritual teachers! Jupiter is conjunct this week's Solar Eclipse.  Viola! Dass crosses!  Who's next? The Pope?

We've seen lots of headlines about "LEADERS" (I use that term with a specific expression)....this past week.  And we will see more- because its ALL JUST BEGUN TO be the last chapter of you know who!

SHOUT OUT- to Christianity Today-   THANKS for calling a spade a spade!

Everyone needs to know what tool is being used, and who is using it. Don't be used by the spade digger, let him continue to dig his OWN grave. He will.


Btw, I think a subscription to CT for Christian friends is a great gift! Yes, I am aware they'd likely diss me for practicing astrology, EVEN thought the Three WISE MEN were ASTROLOGERS!!!This is lost on many people that mistakenly think the tool to make life smoother is somehow-"bad". Still, they did step up and speak out this week, and that is commendable!


Eclipses will shake up your world like no other event.  They dig up and carve out new highways.  Its up to you to get in the car and put the rubber to the pavement.

Planets don't make things happen- PEOPLE do, by their actions, but the planets are big spot lights pointing WHERE you MIGHT consider making some changes, and thus be happier.  (time to listen to one of those songs!).

Venus is in Aquarius.... and all I have to say about that is- let's sing along:

Come on now, let's love each other!

I was lucky enough to meet Jesse Colin Young when I was a twenty something.  He was playing in San Diego, and I was a groupie. Well, the goddess was with me, because in one of those very star-struck moments, (more ways than one!) the universe had a good chuckle with me. I was on a job interview. It was working on a ship restaurant, (might of been the Queen Mary, I honestly can't remember).. I walked in and waited to be interview and who did I see sitting at a table, but HIM. I was a wreck for that interview to finish, because I no longer wanted the job, I wanted to say hello to that voice!  And I did! I don't think he noticed me more than two seconds, as there was another star struck female sitting by his side...........that voice...... we should listen to him!  Love one another now!

Venus will stay in Aquarius until January 14th.  Love for humanity is one of its greatest strengths.  This is the perfect time (all time is perfect) to show that virtue!

On December 30th Mercury will join the line up of Capricorn. On the 1st, it will trigger the Solar Eclipse. INFORMATION-------- what was said when and by whom will hit the headlines again.  In your own life, sign the dotted line with awareness. Finish the written project. If  Santa missed something on your list- go get it for yourself! When the information planet triggers an eclipse it means that some new facts are presented to you, to aid in a choice.

The world enters a new decade- 2020 with Mars in the last degrees of Scorpio. 28'36".
That is the take no prisoners sign/degree. (almost @ 29). It's also the degree that creates magic. It is the mad scientist in the lab, trying one last thing- and BINGO.......a new cure.  The final touches on a project that you've labored over, or the moment in meditation when it all vanishes into glorious empty vastness. This is concentrated energy- one pointed focus that brings a deeper level of understanding. When you ask who is the doer when I am one with the doing? Koan moment.

What is finished is finished. Not just the decade. Make the bad choices of the last ten years, something to learn from, and move on! Look to what you accomplished, and figure out why.
Maybe its as simple as- I survived.

In these first few days of the new year, new decade, make a list of what you wish to strive for. Make space for your emotional, physical, and mental goals. You'll get some help from the planets Saturn and Pluto when they merge on the 12th of Jan 2020. By then Mars will be in Sagittarius, (oh, be glad!)  your actions can steer the rusty old bad habits to the dust bin. You'll have enough energy to move mountains, or at least hike over them. This combo of Saturn and Pluto is about how deep you want the well to go. In spiritual life we say- go inward- to the heart center, and practice staying there! Over and over and over again!

January 6th  Uranus (shake it up) goes direct- and we will really begin to feel like a change is coming. And it is. Actually the mindset has been here. We are moving into a decade of progressiveness that will be much, much, * MUCH * more in tune with humanity.  People are waking up! They are expanding their consciousness.  The old ways are just hanging on by a thread, and they will be cut loose. You can't stay in the 1st grade forever! Uranus will make sure of that! How? By introducing to you new exciting adventures. Go ahead, I dare you- do something this month you've NEVER done! Something that takes you to beauty and love.  Go some place you've never been and seek out what it is like to push yourself beyond where you are comfortable. Attempt to play a musical instrument, eat a food from a culture that you've never had, volunteer at a soup kitchen, or animal shelter. If you've not been to a museum- go to one, or three!   There are a thousand ways you can push yourself to a new zone. Just try something different and see how it opens up your confidence and your eyes!  Experience is the best teacher.

The planets are not here to punish you.  They are beams of light to point the way for expansion. To trust that you are enough.  You are divinity itself, seeking expression through a human form. Divine wants you to KNOW you are made of star dust!  SHINE ! Spread goodness, love, compassion, and Happiness will be yours.

Remember, if you get stuck, (we all do) play those songs!