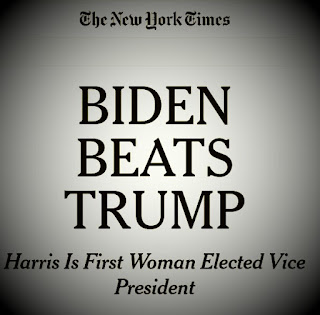 It is true. It is a fact. And we will never forget it. THANKS FOR VOTING! America is still a democracy!

What a year it has been. We will never forget it, because so much has happened in the last twelve months, it feels like its been over a decade since we rang in the new decade.

In trying to stay sane, safe, and secure- we've not really had the chance to fully appreciate how we have become a progressive USA, by the sheer act of voting in our first female Vice-President EVER. That took 244 years, I am dismayed to say.

We won't stop there- we will continue to elect Women to places of high power, because after all- without women- there would be zero men! It has taken far too long for the fine mind of the female to take a seat at the head of the table that she helps feed.

In astrology the Moon and Venus both represent the female. In America's birth chart the Moon is in Aquarius. And on December 17th Saturn moves into Aquarius, on the 19th Jupiter enters the progressive sign, and on the 21st the two hold hands to set forth a new twenty year cycle! It will be a glorious site in the sky, and one that man hasn't been witness to since the middle ages.

Great Conjunction of Jupiter and Saturn

And yes, we shall see so many GOOD changes in the next two decades for so many that have been pushed aside since America was born.

This is truly a time to celebrate, even if right now it has to be a solo glass lifted into the air, and the choir is singing from a zoom meeting.

Will it be without more struggle? No. But the change is HERE- with this first step, and soon it will become a fast paced walk- with the ankles no longer wearing shackles, soon it will be a skip and then a leap into our new future!  Congratulations AMERICA~ you have grown into a broader mind!

Aquarius rules the brotherhood and sisterhood of man. The diverse family that we actually are, includes so much more than just man/women- it is also the family of nature, animals, elements-all of life!  Aquarius, "the water bearer"~as it is called,  is actually an air sign- as the intellect becomes deeper and broader in its ability to perceive dreams, and mold them into reality, nourishes us with much needed oxygen, just like the need for water.

The eleventh sign in the zodiac is about the future and ours has gotten a big boost in 2020 to look at life through a different prism. Being in lock-down for almost the entire year, has given many a chance to reexamine what they believe security is. The reflection is a slow process to decide if they wish to continue on a path they embarked before COVID became a household name. So many things changed- from how you pay your rent, eat, stay healthy, to what the role of government- as a safety net could mean.

Check out my current podcast on the recent Lunar Eclipse:

We are "in between eclipses" currently and this indicates a very powerful and changing time,on top of everything else we've already dealt with so far. Eclipse are new and full moon that have sunglasses on- so you don't see the big picture yet- there is much going on behind the scenes that comes to your view later- as you dig to discover- how and where you need to plant and grow. This is not always welcomed at first.

Eclipse bring the BIG STUFF- Marriages, and break-ups too, moving, new careers, births, deaths, and a changing of direction.  It is best to sit tight, (when possible) before making for sure- written in blood deals during the eclipse window. However, viewing the options and researching the possible paths is excellent, then you can act with more knowledge and less impulse.  Many people have major life shifts, and others are 'shocked' but after you find out later that the 25year marriage had been on the edge of a cliff for a long time, you aren't so surprised. Partners who plead they "never saw it coming"- often have had their shades on for a while-sleeping 24/7 to what they didn't want to see.

Eclipses also bring us big opportunities that we have painstakingly worked toward for a very long time-  the 'lucky break' is really about being extremely prepared for when the crack in the door might happen- which is what that eclipse new or full moon can bring!

The next eclipse to 'launch us' into the future is on December 14th. It is a Solar Eclipse at 23 degrees Sagittarius, and it is going to bring new beliefs into our living rooms and our governments as well. This eclipse falls on the same day in America that the delegates meet to cast their ballots based on how the states they represent voted. Since the current occupant of the oval office is unable to accept the FACT that he lost, and is a very sore loser, this has caused many to wonder if representatives would go against the voters and well....cause a revolution?

Why anyone thought that 45 would have a teaspoon of grace in his blood is beyond me. This eclipse on the 14th clearly shows 45 is moving house, so don't worry- your vote will not be dissolved by his falsely calling it illegal. He is moving, the Solar eclipse is on his fourth house moon. He's not working as the president anyhow- he's playing golf, and begging you for money, that he will spend while playing more golf, hopefully in Russia.  And I suspect, he planning on starting up his own TV network with your hard earn cash. So you givers to the grifter are making sure he has a job. He'll talk forever about what he has always gone on about- HIMSELF.

Meanwhile back to reality- 281K people in America are dead of COVID.  We thank our lucky stars that BIDEN/ HARRIS won, because otherwise we'd likely never see a vaccine!  Remember 45 told us in January "its no big deal", and then he told us in October- "don't let it dominate you" and he is still holding rallies that are super spreaders. Seems to me, he's bent on a mission to kill most of his supporters- not help them.

Fear not, the adults are coming into the new administration and they will not only make sure you have the medicine you need, but I predict Biden will pass a Covid relief bill that is larger than anything in history- and this will bring so much joy to so many, that they will forget that we've had an abuser in the White House for four years. You'll recognize the difference because of  the aid you get-minus one liners flying out on tweeter every five seconds. We've all been bullied for way too long.

Its going to take a awful lot of work to glue the USA back together- but it can be done!

We've still got some rough patches to get past this month- Mars in Aries makes a final square to Pluto on December 23rd. That is a muscle that is strained. Our hospitals and essential workers are over taxed! Be kind to them- don't get sick, and please WEAR A MASK.  It is so simple, and yet some people just do not want to be adults. Mars square Pluto is also about explosions and powerful anger that is released. I am hoping that it gets used in a manner that is productive- such as a workforce that implements the vaccines. It is possible that a volcano blows, don't let it be you.

The Winter Solstice takes place on December 21st at 2:02:12am PST. Just as you are gazing at the night sky wondering if Santa is traveling past Jupiter and Saturn and starstruck at the beautiful sight, will he forget to make a stop at your house? 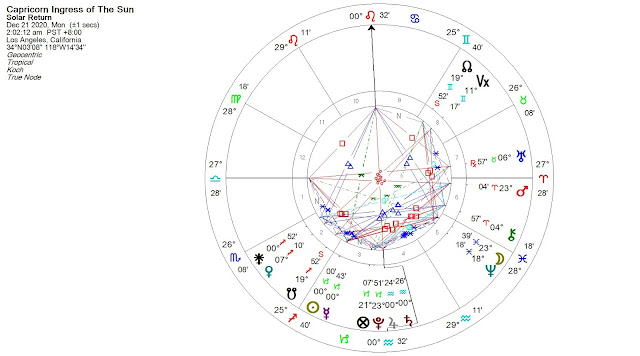 Don't fret, he already has come- this year he brings KNOWLEDGE. This is also a time when Vice-President Harris will become a more predominate voice in this new administration and California will get a new Senator.  It is highly possible that in 2021 we get a second new Senator. Feinstein is getting up there in age.

Even though this year has been one for the history books, let us be sure to add a page into our own personal diary that we learned that we were stronger than we thought, had more loving friends than not, were filled with gratitude that we witnessed America stay a democracy and lived to write it down.

Happy Holy Holidays to you and yours.

Thank you essential workers who have risked your lives everyday!

Thank you for respecting life and WEARING A MASK

And most of all- thank you dear readers for reading and caring about astrology!

You are made of STARDUST~GO SHINE 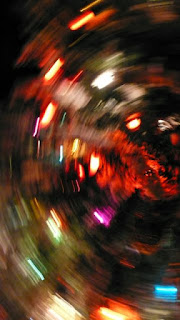