Basketball in the Lemon tree 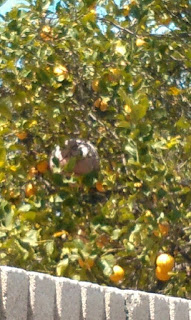 Been feeling a bit on edge?  You are not alone. Things not quite landing where you intended them? You are not alone. Not sure which direction to go in?  Hold tight, soon the path will be lit up in techno color Dali style. Symbolism will take on new meanings. Color never looked so wild and abstract art makes a comeback....why?

We are on the verge of Uranus, the way shower, flying into the sign of Taurus for the first time in eighty-four years!  This will take place on the 15th of May, @ 8:16:40 AM PDT.  Uranus entering the Bull sign, will mean that bitcoin is here for much longer than you think because Taurus rules money, and Uranus is 'different' so a new currency entering into our system is appropriate. Taurus also reigns over art, and what sells will be changing. Taurus by its nature is a conservative sign. A loyal sign, that doesn't particularly embrace change. Uranus is never sitting still, so change is its M.O. and the more outside the box the better. Travel on new paths, new airways says Uranus. So when the conservative sign enters a non-conformist planet, things get out there but with structures intact.  For example, you get married, but don't live in the same house. Make traditional art but sell it online. Plant a garden of exotic shapes and colors. Date someone vastly different from you.

The last time Uranus was in Taurus, Hitler was coming to power. Take note. Take a stand against even the most remote vibration of this! Speak out now while you can. Yes, history can repeat itself, lets make sure it doesn't.


Uranus rules 'freedom' and it will be redefined in the next seven years. It also rules earthquakes, and Taurus is an earth sign- the earth will move and shake a lot in the next few months, and up to seven years when the hard aspects come up. We have one coming up right as it enters Taurus.....on the 16th of May, Mars will square Uranus!  This week of May 14th is loaded with energy to change your world. Mars and Uranus square off- as tensions build with Iran.  Not a good thing. The placement of Mars is in Aquarius, in of itself indicates quakes can increase when it squares the earthquake planet the odds build. There are many many ways that a 'quake' can enter your world. This is the vibe I am speaking of that gives us a pent-up feeling that change is coming but we aren't sure which direction it's going to come from. Bolt yourself down to what grounds you. Working with the earth - is a good thing to do now. Back up your computer and techno devices. Cyber war fare is as real as gun fire. Banking will be especially prone to scams and cyber attacks while Uranus is in Taurus. In Nov. we will get another blast of Uranus in Aries (during the retrograde phase). This will last until Spring of 2019. Then Uranus will once again enter the sign of Taurus. People born with Taurus at the early degrees of 0-3 will have a preview of just how changing life can be! A dress rehearsal of sorts.

Friendship in love is favored. Take your time. Real doesn't have to rush, yet, plenty people will. I'd spend much time in the garden and wait and see if the seeds are really going to germinate into flowers. Share meals. Gourmet. Go to the Opera. See Art. Share cultural events together. Give it time to turn to sparkle that has no burnout.

Things might not land where you think they were, or should. Maybe that's ok. Blessings come in strange designs if you open your mind.

There is a new moon on the 15th and its at 25 Taurus. Another layer of let's start new and let it be real. This new moon is trine (easy support) to Pluto. The deeper you dig, the longer the roots and a long life is promised. It's more important to do something slow, and with quality now.

On May 25th a wondrous trine between expanded Jupiter and dreamy Neptune in the water signs. This is surely magical thinking. Make music, write poetry, create anything that brings you to the zone of peace and upliftment. Jupiter is in Scorpio and Neptune in Pisces so you could find comfort in 'the art of the masters'- so visit your local museum and throw some money at them in support. This combo also is about prayer, meditation, and positive belief. So do some of that too!

The ARTS stay alive as long as we support them and make it know that they hold a high place in our values. Life without color, music, film, dance, etc would be dreary. So get about and take a class or just get your body moving to the higher realms of consciousness. The world needs this now.

Please take note of the photo above and be forewarned about the folly and fun of landing where you thought you wouldn't.