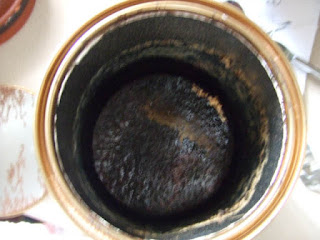 The image above is what Irish Oats look like sealed in a tin for a few years.  Spontaneous melted strangeness. Chemical reaction. Very bizarre. June will be like that tin. OR like this:


The sun has moved into Gemini. Venus is in Gemini. The sign of the twins. Multiple twins. Gemini energy on its own is multi-TAXING........ then you realize that Jupiter is square to that energy, so even more choices on the table...pass the WHAT? WHAT IS THAT? I AM NOT EATING THAT!  (picky Jupiter in Virgo). Too many choices make for crazy. Antidote?  Saturn to the rescue. Sort of.  Saturn is in Opposition to the Gemini energy this month- holding tight the rope to keep it taunt so that you don't droop downwards. Look at all the choices, but stick to the one that allows you the most freedom. Cast your net far and wide. You will need to cover your bases. Keep your options OPEN.

Then just when you were sure you'd figured it out, Neptune pops into this mess. And yes, its going to be a kaleidoscope dream machine mess. Neptune is always flying high, but in June she turns retrograde (on the 13th) so she'll need to go inward to discover the compass. This isn't going to be an easy journey. You'll get lost. You'll get found. You find out you liked being lost. Confusion sometimes leads to peace, because if you 'don't know' you aren't held responsible in the same way. Neptune will be in a square to Gemini as well. Its in a battle with Saturn too. And that is a stand off like being in the Jungle and not knowing WHERE THE ENEMY IS. Is it my imagination? Or is it real? Did I really DO THAT, SAY THAT, WISH FOR THAT? Or - am I doing some crazy time travel?

Basically we have a grand cross going on for June. In the signs that are shape-shifter. What you see isn't limited to what you get. It can be mentally exhausting dealing with so much changing points of view.

So give yourself lots of time out. You will need it to figure out the cross word puzzle that is your life.  I KNOW THERE IS ANOTHER WORD (choice) HERE! What is the MEANING OF THIS?

Lots of planets are still doing the looking over the shoulder thing. (retrograde). As a matter of fact- the only ones that have moved into forward motion from the five retro May planets are Jupiter and Mercury. And Mercury moves into her own sign- Gemini- on the 12th. Ideas will flow- its pin pointing them to the zig zag motion of the hummingbird that's going to be difficult. Finishing the novel will seem and be impossible. Closing the deal~~ lots of back and forth- almost - maybe- kinda- can we discuss this some more?  Call me back. In July, when I might know what I want. But I might change my story -again.

June 29th Mars stations direct. LORD HAVE MERCY. I might get something done! Mars is still in Scorpio- and this re-entry (on the 27th of May)  was very high profile in the News: Glorious Harambe, the Gorilla, was Shot at the Zoo, Killer Bees sting a man in Arizona to death, and a movie star has a ugly divorce to deal with (Depp). He's a Gemini, btw. Say a prayer for all the Gemini's you know- they likely feel like Gumby right now. Getting all twisted inside with how things are not exactly going as they'd wished /planned for. Try to help them GET grounded. This is NOT the time to escape into altered states of mind-set. You must simply take control of the baton and lead the Orchestra through Mozart - Requiem in D minor~ here...give it a listen:

It's going to be a complicated month. Jigsaw puzzle energy. Sometimes that can be fun, sometimes its frustrating. We will see both in June.

The best way to deal with this schizoid energy is have no attachments to the outcome and stay with your humor.  Think of life as a circus. Some shows are slap stick funny, others are dangerous acts. Seek out comic relief.

There is a second Sagittarius full moon- (a blue moon)...on the 20th...this one is at the last degree of Sag. The one that happened in May was in the first degree. Whatever you started then can be finished now. Summer Solstice glides us into Cancer energy @ 3:34PM PDT on the same day as the Full Moon. Maybe the cycle of beginning a new season can bring some nourishment.

You might want to just toss that Science project though- somethings just don't pass the test- learn to RELINQUISH them.