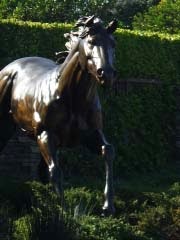 It is time to horse around! Work out that charlie horse in your leg and get your groove on, because VENUS is moving in direct motion in less than 24 hours. Its time to act on the love- understanding that you've come to since she's been retrograde. Assuming that you used the period of the last six weeks wisely; and YOU now have defined love, how you give it and get it, what its not, and what it IS-and soooo make a move for it! Make SPACE for LOVE.

LOVE is not all that Venus is about. She's also about what you value. How you value yourself. Most people have been working this out for the last few zillion life times. Especially if you place your value on elements that change- such as your job, your standing in the community, your bank account- all those things go up and down. Holding your very divine self as something to value is akin to liking yourself. While Venus was doing the backward shuffle, old loves likely showed up in your mind, and maybe in life. So, even as they may come and go- love and how you chose to love yourself and others doesn't have to. As a matter of fact, if you don't love yourself you aren't likely to draw anyone to you that will see your shining light- because it will be covered up with dust.

Venus is also about the 'price' of anything. Markets might make an upward swing as Venus gains ground.

Someone recently asked me about the economy~ and I have been hearing comments like: "The middle class is shrinking".... I am here to tell you two things. One- the middle class isn't shrinking. It makes up the most of America. The middle class has had a lobotomy.  They are stone cold zombies thinking that some 'leader' or another will save them. Isn't going to happen. A collective VOICE might move things towards a balance that gives the middle class a reasonable chance at making a life and not just a striving to meet the basics. But, the energy is -that you have to SPEAK UP and move towards a collective representative demand for change. Passing around a notice on facebook about how congress should have to work for less, isn't going to do anything but clogged NSA's data collection filter. Think about it. Change happens when you INVEST your energy and people gather in strength. Sitting in front of your lab top expressing your anger is just sitting in front of your laptop expressing your anger. So, if you want to make some changes.... start researching how laws are presented and get to the point to being voted on by our very spoiled representatives who actually have a pretty easy life. They sit around and argue for a bit, throw big hissy fits, and then go on a paid vacation. Then they come back and do it again. Everyone is so busy yelling at the party that isn't the one they voted for and blaming the other party for the issues they don't agree with-they don't notice that the 'parties' are pretty much living a party-life.  I want that job. Maybe I will run for office. I am thrilled that Marianne Williams is running for office. I haven't had a chance to look at her stars....but I will say, if everyone is as sick of the spoiled brats in Washington as I think they are- she's going to march to victory.

Secondly, there is LOTS AND LOTS of money in America. There is no shortage of resources here. How can our economy be in 'bad shape' if people in congress are able to RAISE 4.6 BILLION dollars to get a job that they then go on vacation more than they actually work? I mean who gives them 'money' to be LAZY? The American people!!!!  Corporations too.......but WHO makes up corporations? THE AMERICAN PEOPLE~!!!!

At one point a third party is going to blow the entire game off the boards. And soon. Very very very soon. When the Uranus square to Pluto hits the American sun degree-(13 degrees of Cancer) we will see the American version of a revolution. It will look very different than the ones that have been happening around the world- but then same thing will happen- The structure that no longer serves the people will crumble.  It will be stressful, and uncertain for a while- but 2014 Summer is going to usher in a BIG challenge to what has passed as our "DE-MOCK-cery".... When Saturn hits the 24 degree of Scorpio (Nov) and squares America's Moon, the "AMERICAN" (middle class) people will wake up from the nightmare of silence.

But for now, let's focus on the fact that Mercury (the mind) is about to go retrograde and you need to back up your computers and make the closet cleaning out lists, and get ready to triple check every project you've been working on to make sure you dotted the i's and crossed the t's. Do your homework, throw some salt behind your back and just move with the flow of this retrograde......it's this way all of February. From the sixth until the 28th. And then.............

Mars flips retrograde on March 1st.  I wrote about that in last months blog. So go re-read it.

The real thing that I wish to convey in this month's blog is that as we move into the year of 2014 you'll do well if you make a plan of how you wish for your dreams to manifest. First by deciding what they actually are! You could use the mercury retrograde period to refine them. Today, is a new moon and its in the 11th degree of Aquarius. Its in a marvelous relationship to the planet Uranus. That makes it a super charged inventive energy force to work with. Be BRAVE! Think and work in VAST ways. LEAD. Imagine that you had all the resources you need to achieve your goals.......you have a mind that if used in the correct manner can step by step reach the summit. Yet, people give up! They don't believe in themselves. And so.......no one else does either! This is a year to move it- use the power of your mind to open to ALL the possibilities. It starts with you. It is about harnessing your wit, imagination, and ideas- and channeling them out to the universe and then not giving up until divine light shines the way. Be willing to be flexible. Be willing to take a chance. BE WILLING TO LOVE WHAT you "DO" and "BE" in LOVE.  And let go of FEAR. Because you know what? Fear is just a THOUGHT. Fear is just a reaction. Its as much a choice as LOVE is.

So decide how you want your year to be. Are you going to get on that horse and hold the reins with all your might and fly with the wind?

Saddle up. Have a great ride. New pastures await you.

Note to the Queen: Time to retire.