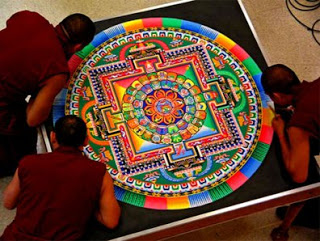 There is a special configuration in the sky today. Its called: "Star of David"......also known as Grand Sextile.
The planets all tie nicely together by a series of sixty degrees. Venus sextiles Mars and Jupiter, Jupiter sextiles the Moon the Moon sextiles Neptune, Neptune sextiles Pluto, Pluto Sextiles Saturn, Saturn sextiles Venus. From love to love the world goes around. Enclosed within this is two trines one in Earth and one in Water. They support each other.

It means in layman's terms- the flow is there. The opening is there. We are all connected. Or rather the stars in the sky are letting us know via a mirror- that to share our common thread is to be aware of the energy right now. What is our common thread that ties us all together? Love and the need for it and the light to dream our dreams by.

This energy by itself will 'open a door' - such as the Pope has done today by stating that he doesn't 'judge' people who create partnerships with the same sex. THIS is an opening! A collective opening is possible when everyone starts to be more open minded via the heart. Do I expect a miracle today? Well, I expect them all the time! And I get them too! But today's star energy will require that we do our part- and that is called: EFFORT.

To be open- means to swing out. To make space. To think positive. To offer a laurel branch. To be open in a harsh world takes faith. And the Star of David is as much about faith as it is anything else. When we work hard at something we create our own openings because of our belief that the energy we devote to others, ourselves and our creative desires will give us fulfillment. When something is just handed to you without any effort on your part, its not going to help build confidence. When you don't risk the chance of failure you don't gain as much as you do when its a sure deal. Safe has its place in the world, but to always play it safe is to not grow.

"WOW, I DID THAT!" is to push oneself......and today is the perfect time to work out some new goals that test your limits and make you aware of the vastness of what you can do with your life.

This configuration is perfect for that because its not all easy and light- even though that is at its core.
The Sun (ego) is in a square to the Moon (needs). Mars (action) is in an opposition to Pluto (power) and both Pluto and Mars are in a square to Uranus (unexpected). So you have to struggle a bit to make it happen. Or even a lot. But the struggle is what gives it meaning!! Don't be lazy! And I am here to tell you that sometimes too many 'openings' make people lazy. Make life too easy and they just can't be stirred to get out of the pj's before 3pm.

Its really about blending effort with ease. Too much of either and the soufflé sinks.

On July 31st Mars in Cancer will sq Uranus in Aries. FIRE AND BRIMSTONE. The fireworks and protests around the world will continue. The water energy in Mars can calm the fire a bit, but we have to work with this energy and to do so means don't break open the flood gates of passion via defense. Don't unleash the volcano of rage; try to find the middle ground. Do you really need a 10 foot high fence to keep the crazy people out?

Most of the time when people and nations 'snap' its because of LONG HELD ANGER BEING RELEASED. Its built up over time. And whose fault is that? If one is allowed to let the steam off now and then the little things don't matter so much. Even the big things (Pluto) can be dealt with in a rational manner. But when we push down the emotional needs to such a level that they become rouge elephants then everything in the path is destroyed. Maybe that has to happen in some cases. Birth/Death cycle. If you have a strong Aries bent, you can thrive on the challenges that this energy brings. Rebuild the house that your stack of cards WAS. Water seeks to fill the void, and fire just goes wherever it damn pleases- so each have their way of creating a new path. Both are needed- we cook with fire and we need water to live! They have their place- and honoring them is important right now- but don't expect that this will be an easy balancing act. If you are feeling unloved- then love yourself with creating meals that are healthy and good for you. If you are feeling too much heat- get in the Ocean, bubble bath, under the waterfall. If the emotions are too heavy, then you need to MOVE THE BODY, get the fire energy within moving- bike, do Tai Chi, take some ginseng, watch the sunsets and give thanks to the eyes that you have to see ! Roast marshmallows on a stick and allow yourself to play like a child. Painter? PAINT with your fingers for a day. Shake it up! Kiss a stranger! Hug the dog. Drop five dollars for someone to find!! Life is a joy when you are joyful. And being joyful is really at the heart of both Aries and Cancer. One is done with adventure the other with safe zones in place. So its ok to have the orange cones out, just don't space them too close together!

Venus is in Vigo (the servant) until the 16th of Aug. Virgo is great for details and more details! Fine tune your body-(good food,exercise,herbs,and meditation) and when Venus moves into Libra you'll be feeling the LOVE. You'll love yourself more because you've been good to yourself! Remember it all starts with the self. What is inside is outside. And you'll be paying much attention to the beauty in the world by mid-Aug. Venus in Libra will square Jupiter in Cancer in Aug. I believe this is going to be GOOD news on the economy and on the art world. This is an aspect that is short lived but the scent last a long time! Its called: Consumer Confidence!!!!

Yippee the wicked witch of the recession is Dead!

Mars moves into Leo on the 27th of Aug and then we really get cooking with the big show!

All the world is a stage and its "SHOW TIME FOLKS" like none before. Buy that front row seat for Opening night- It's NOW!