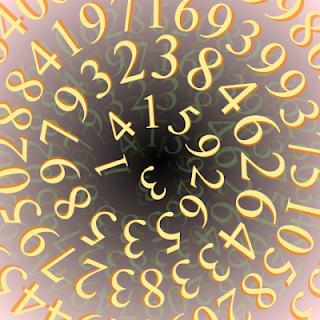 It's 12-12-12 today. That reads the same way in India too. (They date things by the day first not the month). So we can rest assured that there's no confusion on today's date- no matter where you live in the world. There is likely confusion on just how much numbers 'effect' things. Or controversy on it rather.  Today would be a great day to get into the thick of it with your mind and the concept of how 'numbers' can change mind-set. Can they? Um......well, if I have an idea of what I should feel like or act like at a certain age (which is a number) then sure. Or if I have an idea of how secure I am with a certain amount of numbers in my bank account, then sure. But what if I am free from the numbers game? Then do I have happiness and elevated consciousness no matter what the number? Time is a man made thing- so is numbers. So how can a man-made thing- concept control when and where we reach higher levels of thinking? Should it?

I am discussing this as- all the "MAYA-N" hype over Dec 21st is boring me to death. How many times I have been asked what I think about Dec 21st? ~lots. What do I think about Dec 21st? I think its great to honor the Winter Solstice (or Summer depending where you live). I think anytime we move into Capricorn energy I get excited as I relate very well to that earth bound goat. Hard work and steadfastness are my best friends- and that's what will get me to higher levels of understanding-not just focusing on  numbers. Not limited to certain days. Not only on a Monday and never on a Sunday kind of thinking for me. YET- I do recognise that there are 'better' times to achieve a goal than other times! I am an astrologer after all. Don't plant the crops during an ice storm and expect them to bear fruit. Don't launch a project when mercury is retrograde and the moon is void of course and expect a fast result. But maybe that's perfect for you if you need to learn the lesson of 'all good things come to those that wait.'

So does this mean that today we have magical thinking because its a 12-12-12 day? Well, the supreme Numerologist, Cherio believed that the month of Dec and the number 12 actually breaks down to 3. And it does. And so its really THREE energy that we are working with. Father, Son, Holy Ghost.~~~ Brahman, Vishnu, Shiva.~~~ Begin-Protect- and LET GO..(or let god some say)...

So- that's how I feel about the 121212 energy- move it. Start it- secure it- save room for the miracle. Don't get stuck in what things HAVE to be right now. We are after all in SAG energy now- the open-minded seeker of truth. The muscle developing archer. ARCH the mind to the thought that maybe a mind-numbers game can unite the world to higher levels of peaceful living. Why not?  I am open to it- even though I don't think we have to wait. We can do it NOW. Endings and Beginnings happen every second of every day.

Three energy is also tied to Gemini energy- the zodiac sign that is ruled by Mercury. Mercury has just moved into Sag. it will be there until Jan 1 2013.  Yes, on New Years Day- Mercury will move into serious thinking, hard working, what's in it for me, give 500 percent Capricorn.

So until then- for right now- today- think of the possible changes- movements you can make in your mind- set to manifest for yourself and the ones you love, a cheerful attitude and approach to living on this always diverse and very complex plane called -living on earth.

TOMORROW-  Uranus stations direct. That means the bow that been 'pulled back' since July 13th is about to be released. Mark your target- make it a loving bow- and do not take the focus off where you wish to land. What would also be helpful - make friends with opposing views. See the value in someone else's values. This is also called generosity of spirit. And we are in the 'holidays' which really should be called 'holy days' or hole-days coz a lot of people see them as what they don't have or won't get instead of what they do have- a chance to make the heart expand.  Do you think when Christ was up on that wood - in all that pain- he allowed himself to think- "maybe i made a mistake in thinking man can love everyone"? ... do you think that when we celebrate his birthday with a shopping trip instead of a changed bad habit of ours we are honoring the pain his physical body endured to try to SHOW BY EXAMPLE that he loved all; forgave all?

I know I sound preachy... its that darn Sag energy that gets me thinking what Christmas is really about. I love opening surprises just like the next person. I am very very child like in that way. But what I want this year is for hearts to be opened and love to prevail over greed, selfishness, closed mindedness and for some truth of what that man on the cross endured. Even if its just for one day- whatever day you pick- that day will be the magical number.

Happy Healthy Hearts to you all in this Holiday Season!