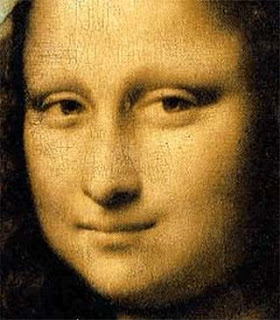 Big news out today is that the Mona Lisa is really a portrait of Da Vinci's lover, and longtime male apprentice, who also posed for him. Ummmmmmmmmmmm.

Interesting that this 'story' would break on a day of so much Aquarius energy flying around. Aquarius likes to shake things up! We just had a new moon at 13 Aquarius (Happy Chinese New Year- Rabbit year!) and Mars was very much a part of that new moon. So for the next couple of weeks rebellion is in the words, in the action, and in the discoveries. Meaning that the un-thought-of--- is manifesting right before your eyes. Dare to believe. It makes life more exciting! And excitement is a key word of Aquarius. Today the Sun,Moon,Mars,Neptune,Chiron, AND Mercury are all in the sign of the humanitarian. Open your minds, see what pours out, what pours in. It is rather interesting to me that Aquarius being such a 'take care of mankind' energy, is also a very very FIXED sign. Once its mind is made, undoing is rather a difficult task, unless the information presented to do so is brilliant and convincing. Its also very detached from emotional bias, as its energy is primarily intellectual.


Best use this stellium (cluster of stars in the same sign) for inventions,new friendships,work that demands the collective work together. Start a Union! Or see what levels you can take your own originality to. Don't be afraid to experiment, RIGHT now is THE time to do that! The stars will support you. Do be careful with unexpressed anger. When we repress our energy it has to go out somewhere- and very often we see 'breaks' (as in falls) happen when the stored up energy isn't allowed to freely go out- it goes out by broken bones! That applies to Countries as well as people. Egypt's eruption is only a starting point.

As Jupiter (beliefs,relating) gets closer to its exact square (tense) to Pluto (power) everyone is going to have that boiling over feeling. Time to remind the self that the best thing to try to control is ones reactions to outer events. Mind you, oppression always leads people to rebel. So, there is a time to act, but in doing so there must be a plan of action that leads to peace. Unfortunately, sometimes fighting is involved. Standing up and being strong is also part of this picture. Numbers do and will count in being able to create change. The masses are a power that can't go unnoticed, or unheard. But that alone won't manifest a shift in power. It must be looked at a deeper level, the one that starts by looking within for answers.

Today Venus changes signs into that hard worker, Capricorn. As it travels through cappy, we get much more serious about love, and all this unstable energy in Aquarius makes one desire firm commitments in love and money! So if you are 'in love' the tone will be a focus on keeping it solid, and REAL. PASSION PLAYS are just around the corner- as Venus will Conjunct Pluto next week. Oh, MY! Talk about "Power-Partnerships"........this IS the combo! Mergers that together become MUCH stronger. The blending of these two planets in Capricorn is all about producing a lasting product, what we can do together, how we build an empire. It's also a line up that brings about fated meetings. Obsessions, and I am talking Antony and Cleopatra type of unions. Till death do us part, and we often see such a level of intensity in the match that it is impossible to live with, yet not able to live without the other!

Valentine's day? SPEND THE MONEY. You won't regret showing love for your other via quality objects given! Give MORE than just your love this year,(SHOW IT)~ recession or not, it will be a good "investment". You see, Venus in Capricorn is very much aware of how much energy, money, effort, time, goes into all that you give. On the job, or in the home. If its a handmade gift, where time is spent creating - all the better. That really shows you care, and Capricorn isn't interested in those who lack in the commitment department. You can't fake it with them. They will drop you faster than a blink of an eye if you take them for granted or forget them. They see your level of making yourself useful/helpful/giving things that LAST as a sign of love.

Are you in it for the long haul? Until death do us part? Carve your declaration of love in the tree of life and it will grow forever, and sustain you.