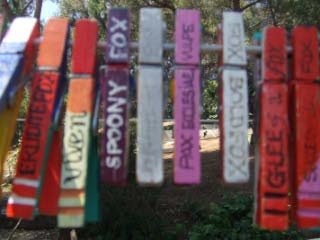 The New Year has ushered in a Solar Eclipse! So while wishing for you in 2011~ all things good, I also wish for you Eclipse Awareness!


WHAT does that mean? It alludes to a list. Make a list- hang out your goals for all to see (that way the pressure is on, if you talk about them out loud you are reminded of them! This Solar Eclipse is at the 13 degree of Capricorn. Which is all about goals, slowly climbing upwards to reach what is important to you. This won't come easy. Saturn is in a hard aspect to this New Moon energy. (that's what a solar eclipse is- a super new moon with shades on).


I would suggest that your 'list' be one that's hard to reach (that way you'll be using the energy and not be USED by it). Allow for input from elders. If you are submitting to higher educational goals, then start with the Ivy league and work down.


California's new Governor Jerry Brown, was sworn in today, he's REALLY got a job cut out for him. He'll work hard, and if he succeeds in climbing even the foothills of the obstacles ahead of him (mainly getting everyone to work TOGETHER) he'll be hailed a hero. That's the deal with SE in Capricorn, you do the work, you do it daily and your reward is metals of honor, and a firm place in the history books.

Right now the energy is "blue chip only" need apply. People can easily see if you are bringing QUALITY over Quantity. This theme will be with us for a year. We might be living in the age of 'instant' everything, but those that have a strong character and old school values, will be the ones still standing at the end of the year. Best worlds are when we are able to have a bit of progressive with true traditions. This is in the work force as well as the personal life.

Life is going to get a bit easier in 2011, but basically its because we've gotten used to working so hard! It will now seem 'normal' to be superwoman or superman. We've learnt to pace ourselves. Change our ways a bit, do without, to the point that when we get that reward, we know we've EARNED it. So I would continue to plot out the path that you feel best allows you room to grown and demands steadfast commitment to excellence. It won't go unnoticed this year. The world is asking us all to be examples of leadership, by leading our lives with full awareness.

We are in Eclipse energy alert. This means the moving and shaking that the earth typically does when 'triggered' by the pull of the lights-(sun/moon)is active right now. I see that Chile yesterday had a 7.0 and the moon yesterday was at the sensitive point of the recent LUNAR eclipse that happened on 21st of Dec.

Mid-Jan to end of the month is most likely when a big one moves us to be here now! That can be in the form of outer or inner quakes! And you know where you feel the earth move the most, is at the top of the mountain. Best hang on tight coz the shift is going to be astronomical, (pun intended)and when the its all said and done, yes you will feel that you're a bit closer to touching that star, or becoming one yourself.