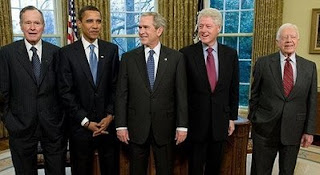 Yes, sir it's true a picture is worth a thousand words. And the one on the left is worth even more.
On Jan 7th 2009 Five men all having one thing in common: Presidents of the United States of America, met to chow down and share tips. When I first saw this photo I was struck by the fact that Carter, was ever so slightly, (but enough to NOTICE) standing not with the group.
I am not surprised.
Sure there is much Ego in that room- You've got- a couple of Leos (Clinton and Obama) - noticed how they aren't next to each other. I think a good thing, might cause fireworks. Then the 'thinking/talking man' Bush Sr. (Gemini). His son- the one with a direct feeling line to Divine- (Cancer). And then Carter. Libra- justice concerned, and a Nobel Peace Prize winner.
Carter has done more Seva (service to mankind) than just about any former president. He has not stopped since he was denied a second term. He, in my opinion is the strongest man up there. I have no doubt he made a firm choice to stand apart..........maybe 'joking around' as Gaza burned is too much to bare. ( the previous photo showed laughing). Maybe he wanted the photo op to send the world a message- "I DON'T AGREE WITH THEM".
Maybe.
Carter has a Scorpio moon. That's a placement that sends messages in just about every form without using words. He also has a Leo Venus -Mars opposition- with Mars in the sign of Aquarius @ 25 degrees, which is just one degree from America's natal moon.(Hence his success in this country and why the American people love him and he is a FRIEND to the world).
Neptune will very soon be upon his natal Mars- softening his energy force. Also transiting Saturn, the heavy one, is currently sitting exactly on his Mercury. Yes, Jimmy Carter has a lot on his mind, of that you can be sure. And its not about what they serving for lunch. Being a gracious Libra, he'll keep it polite, and not upstage the young stag, but I hope he gives Obama a long monologue on what it means to be a "PEACE PRESIDENT", because Carter is one, and the one that professes to be one hasn't said a word about Gaza.
Oh, yes, I know all about 'One president at a time" line- but I also know that Israel is pounding the heck out of helpless people and WE - the USA are footing the bill. That's KARMIC BILL. And we will pay for it. So will Israel.
The first two months of the New Year- aren't bringing anything new it seems. Just the same ole same ole war-war- and more war.
On Jan 25th we will have a New Moon- which is a Solar Eclipse. In the next couple of days (Jan 13-16th) Mercury will retrograde over that sensitive point. (Important pending news). In two weeks Jupiter will as well.(possible goodwill extended). And around Valentine's day Mars will trigger it all once again.(Passions will rise). This means what the New Moon brings will be revealed during those times, challenged and made even more complicated. The chance for lasting PEACE? An agreement that Israel and Palestine can work /live with?
Somehow I think this year we might have a few more break-ups before kisses and hugs.
But, With Jimmy Carter standing tall, thinking hard and hopefully having Obama's ear, just maybe the new kid on the block will start talking about and with Hamas/Gaza before its too late.
# posted by parker-the-she @ 9:10 PM 0 comments 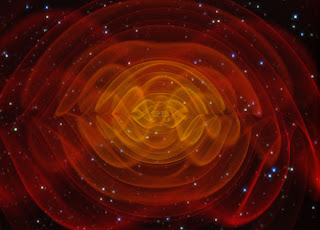 Jupiter Ingresses into Aquarius -
Monday 5th Jan 2009 @ 7:40 am PST.
Gather round ye fellow support system. Be it friends, congress, or the in-ter-net.......... time for the group hug. We can't do it alone, nor do we want to.
All the air signs (Libra/Gemini/Aquarius) get to grow- a bit of luck (unless Jupiter is in a difficult aspect in the natal) for the next 12 months. Especially Aquarius. Be sure you don't over do. Jupiter tends to expand what it touches - that includes the waist line.
Everyone has the chance to get a bit smarter. And the computer nerds become cool. Vice President Biden will shine brighter than Obama at one point during 2009. ( Jupiter rules the position of VP). Congress will make an attempt to 'get along' for the 'sake of all'........ certainly key words of Aquarius energy. Humanity and the direction we are going in will come into huge focus. The whole will become more important than the individual.
Look to your natal birth chart to see where you can learn something new or meet new friends. We are all going to need friends in this year of 2009. We don't live on an Island and if we did the weather patterns would force us to become one with something besides ourselves: ie- higher power, divine, the nameless one.
Remember Tom Hanks yelling for "WILSON"? that's what I mean.
I expect that MAY will be key month in America. Right around then Jupiter will contact the moon in our birth chart. I am hoping that the hope we are all placing in Obama (the appointed one) reveals success at that time. The moon in a country's chart shows the mood of the country- and when Jupiter touches that point (in May) it brings expanded feelings- and since its in Aquarius- GROUP THINK. Team effort. Being behind the man. Or is it THE BEING behind the projected - one comes forth? Obama seen as human and not a God-hero. I am getting a bit wordy here- but the idea is that it'll be big and the masses will be involved and it just might be a bit different than we envisioned.
I also see that within the first 30 days of Jupiter's Ingress in 'the brotherhood' sign- we find out that the money troubles are even deeper than we've been told. Like I said Jupiter expands- and that includes money troubles for the USA. But we will find our way, we don't have a clear map yet. Other countries that have counted on us to bail them out will have to wait. We have too much water in our own boat, the hole isn't sealed yet- everyone is going to have to fetch an ore and help. EVERYONE.
IT is an "Everyman" kind of moment. Look to what bonds you with your fellow sisters and brothers.
The quirks and freaks amongst will shine. And astrology might actually become in fashion again. I can only hope. Even the astrologer seeks job security in these times- and they are a changing............here comes the electric car to stay.
Static electricity is the norm.
photo credit-
nasa artist -
# posted by parker-the-she @ 4:56 PM 0 comments