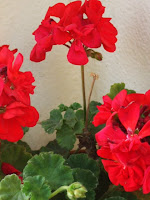 "just as i thought my capacity to embrace humanity was dissolving, divine sent the gift of thoughtfulness. even if i am in the middle of an Ionesco play, i can still find love as an anchor."~ p-t-s


we can always chose love over insanity.......... and it will be a bit easier now that the moon has moved into pisces, and venus has ventured into the land of taurus love. perfect for may day festivals. perfect for love of passion, and passionate love, as venus is in a exact trine to pluto, who can only do it deeply and with feeling. we'll have some structured improvement along with the kissing, as saturn in virgo turns direct on the 2nd. perfect for perfecting the smooch and adding to the bank account, all at the same time.
# posted by parker-the-she @ 7:24 PM 0 comments

Chelsea Clinton's support for her mother's bid to the Whitehouse is well documented. And so is her birth data:

Chelsea has her Sun and Mercury in Pisces- and her strong Mom has her Moon is softy Pisces- so they share a very tight and loving bond. No wonder Chelsea has hit the trail for Hillary- she is like a partner to her in the quest for the highest office in America. I bet they have many late night conversations about their shared dreams in life- (and disappointments) and are never at a lack of ears for each other- as Chelsea's Mercury is exactly conjunct Hillary's Moon- there's a psychic tie as well- (the unspoken support as well as the verbal). How lucky they are to have each other in this grueling battle for the Whitehouse.

So let's look and see what portends in CC's astro stars- for Mom's success- in the all- exciting and important Pennsylvania Primary- just 12 hours from now..........

The thing that really grabbed my attention was that Chelsea is having a Venus return the morning after the primary! And that return chart is a photo of celebration.

The Mid-heaven of the chart- (set for Washington, DC) is @ 7 degrees Pisces. So Chelsea's birth Sun Sign @ 8 Pisces sits right up there @ the very very TOP of the Venus return chart. ( we place the birth planets in the return houses to see 'where' the action is)- and when she was born that Pisces Sun was in her 4th house of "Ma" --- so here we have an image that would say: "Ma just got a big promotion in front of the world"...........

Add to that sweet cake- the fact that her Birth Mercury is exactly conjunct to the Venus return 10th house Uranus--- news that flashes across the world- and its going to be 'unexpected'-- I think the win in this primary is going to surpass what they even hoped for- it will be BIG cheers we hear. And those two will scream the loudest and in sync.

Third factor playing into my prediction that its a day of celebration is that Chelsea's progressed part of fortune ( and it does mean the good news) is exactly conjunct her birth Venus right now- on the eve of her Venus return!! 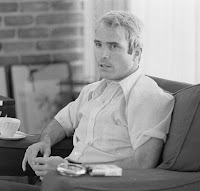 The photo on the right was taken almost 34 years ago.

And he is very photogenic in my opinion. True to his Libra rising. He is easy to look at in that photo. Almost looks like ken, barbie's chosen one.

Today while walking home I happened to actually LOOK at the button that one pushes to get the 'ok' to cross the street. The square above the button is white with black letters and it reads- "Please push button for" and underneath that is engraved in the steel and painted the same color as the pole the name "MCCAIN"......... McCain company makes these structures. Is it THAT McCain- probably not. But it got me in gear to write this piece on him and it got me thinking:

How many will "push the button for McCain?" Enough that he can walk into the Whitehouse? Maybe. Everything modifies everything else in astrology- so we have to look at many charts to view his chances- not just his- but his in relation to America's and Obama's and Hillary's.

Who is this man, that at the age most decide to take it easy in the life, he's game for trying to win the most stressful job in the world. The Titanic is sinking and he wants to be the new captain! What sort of person has that kind of drive? He looks pretty relaxed in that photo- ( that's the gift of a Libra rising- they just know how to pose).

McCain has a grand cross in his chart. The cross he bears as a Prisoner of War, is clearly shown in the chart. He was born with the ruling planet of his chart (Venus placed in the 12th house of prisons) in a 4 minute exact square to Chiron- 'the wounded healer'.........or 'hero' if you like in the 9th house of foreign countries. He has known pain. I have no doubt at all that he wasn't treated kindly while he was held captive. This is such a tight configuration, that it truly tested him and made him the man he has become.

That good looking man in the photo- of course the body changes, but is he still the same person inside? YES- and NO. That young man, is always within him- but who he has become is also part of that grand cross configuration- he has become the elder- (Saturn in Pisces in the 6th) McCain- who pushes himself, and tests himself in the latter years of his life, just as his captives tested his boundaries in his younger years. It gives him juice- to prove he can beat the odds. The fourth planet involved in his grand cross is Jupiter. That vast planet. The one who does bigger- better- and beyond what everyone thought was possible. He is a lucky man. He was born with luck- Jupiter- in its own sign- Sag. This is what helped him to become a POW who came home. Came home to then run for president of the country he served over three decades ago.

So when you have Venus/Chiron/Saturn/Jupiter all sitting at the card game- you have a person who KNOWS how to play his hand well. Especially as time goes by.............. They learned in the school of hard knocks, what works and what doesn't. This combo- and his Capricorn Moon in the 4th house of 'soul' give a constitution that is almost unbreakable. They just keep getting up and going for another round.

McCain's Capricorn moon is also exactly conjunct to America's Pluto. (under belly-and transformation). McCain knows how to 'use' what he's got to offer. He is aware- of the power of power and loyalty, that's why he didn't dish bush. He's going to have a go at learning what to do when you have even more power- as transiting Pluto will hold hands with his natal North Node several times before the race is over. Very often I have seen the Pluto transit over the north node to mean a great loss. I mean a REALLY great loss. One that forever changes your outlook on life. But it also can mean becoming a very powerful person. And learning to deal with power. So I wouldn't count McCain out. Plus the lucky planet will cross over his natal moon right near the election. The moon in McCain's chart rules his 10th house of status- his mission in life- getting the promotion is classic with the ruler of the 10th being favorably aspected by Santa Claus Jupiter.

but..........he also has Uranus in the sky sitting on his Saturn right now. And that is going to throw him some unexpected energy- soon very soon. Like now. Saturn in his chart falls in his 6th house of health and everyday activities. And it rules his 4th- the deepest most personal point in the chart. Uranus rules the 'sudden'- and in his chart Uranus is the ruler of his 5th house. That's the house of kids, speculation (and running for president of the USA is certainly a gamble) and romance. I think we may hear more about his love life- his off spring and his bones. Not kidding here. Saturn rules the joints, bones, teeth, spinal cord. With Uranus sitting on his Saturn he needs to be especially careful of his health. (on election day it will oppose his Venus- surprise ending).

He needs to pay attention to his energy levels. Pace himself- how lucky is it that he's not having to fight off any other Republican ? He basically can ride free for a bit and wait to see who his sparing partner is going to be- Obama or Hillary ( or if the dems are smart- both).......

And I found some very interesting ties between McCain and Obama's chart. I use the word interesting with an arched eyebrow- and big eyes.

As I place Obama's planets into McCain's chart I get a view of how Obama will impact (or not) the Maverick McCain. (btw- maverick is a key word for the planet chiron that is so importantly placed in his chart-interesting the press calls him that).

Obama and McCain are bound together- like lovers who hate each other as much as they admire each other. Obama has his Mars (action) exactly conjunct JM's Venus. This means that BO will trigger- JM's grand cross- he'll kick it into action. Since the 12th house is involved- JM might not even understand the depth of his knee jerk reactions to Mr. hope for change. But not just the 12th house is involved- the 9th- (beliefs) and 6th (service) and of course (3rd) are all going to get in on the action- so BO best be very careful of not attacking JM's record of service'.......... his POW time. The elder JM is an Elder- by the years- but BO's Saturn is sitting on the moon of JM- what this means is that BO is likely to go after the 'age' factor- and even allude to the fact that JM is out of touch with the need for change. In astrology- MOON- SATURN ties are very karmic. What goes down between these two is from the way past- and life-times have likely gone through many incarnations to get to this point in the interaction. Obama will make JM tired. Very tired. JM is a very realistic man. OB is looking upwards in a very idealistic way. When you've lived as much life (REALITY) as JM and parts of it sooooooooo hard- you tend to have little patience w/ 'pie in the sky' people.

The fact that this is a tie that reaches from the past-and has a big impact on both people's lives is also indicated in the comparison by JM's South Node ( its a point in the chart that means old soul contacts) exactly conjunct BO's Venus. Maybe they WERE lovers in a past live? :) I don't know- about that- in truth- but if they did share a life in another age together it was with some love. It was about nurturing. BO's Venus is in cancer- and that's one of the reasons that the American people have responded to his message- America's Jupiter and Venus ( and of course SUN @ 13 degrees) are in early Cancer. But in this case JM's snode in cancer conj. BO's Venus tells us they are coming together to learn more about love from each other. BO's mode has been to keep it positive- on the trail- and its going to be something that JM might not understand. This is after all - a fight- right? How are we loving in battle? Isn't it kill or be killed? And JM WILL go after BO. With full fury. JM's mars is exactly conjunct BO's Sun. The POW will hold no prisoners.

Will everyone please stand up.