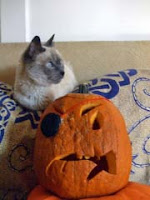 Bidding you a fine Samhain. That's pronounced 'sow-wen' by the Irish. A mystical one this year can be, as the planet ruling all things hidden moves direct on the 31st. Neptune IS the veil and its lifted on this night so our (left the body) loved ones can come a calling- the not so loved ones can show up too, so be forewarn. Recess the mind back to May 24th- that's when Neptune turned retrograde. What was put on hold, or push under the rug,or just plain denied? Well come sundown on Halloween the green light goes off, and its an awakening to our higher mind's urging.

And a very interesting night it will be. Not just because dreamy Neptune is back in first gear, also the Sun will be sitting on the same degree as Mercury was when the messenger went into reverse direction on Oct 11th. That's 9 degrees Scorpio. I expect this years costumes to be very dark. A kick back to the past traditions- you know-Vampires, lots and lots of death, gore, hiked up skirts. People will allow the imagination to climb Everest and back. Have some fun, be foolish. The Moon is void (having no consequence) until 9:48 pm (PDT) - up until then- you aren't called on your child impulses- but by 10 pm- the REAL party begins- when the Leo Moon takes over and wowowowwow- 'em costumes are revealed- and the seance can begin because the kids are in bed.

Its the witches New Year, so if you are practicing tolerance of all faiths, join them in making your wish list of goals for the next 12 month.We could all start with "telling the truth" to honor Neptune's movement forward.

Get ready to deal with Mars in Cancer turning retrograde until Jan. 30th.It flips on Nov. 15th.This will aid those who lost their homes in the recent California fires. All the 're' words come to mind- RE- think, Re-do, and Re- calls will continue to be in the headlines. Mars rules the army- so perhaps we will finally see SOME of the USA Military come home from Iraq.

The area of your birth chart that has Aries on the cusp is due for an inward glance and an outer remodel. Mars in Cancer is very emotional so - we tend to 'hold in' our steam - until its at a boiling point, not a good idea- find other outlets- like swimming, building a new space (or cleaning out a closet) writing a steamy love novel, poem, short story, or musical tune. Or just find out what makes you feel emotionally secure and go after it. FOOD ANYONE?

Wishing you a glorious 'summer's end'.

The Solar Eclipse of Sept. 11th was @ 18 degrees Virgo. It is very active right now in Los Angeles, and all of California. Solar Eclipse energy becomes "active" when a planet reaches the degree that it occurred in. Mostly we look @ Mars to kick a mundane event shown by the SE- but clearly other planets have some say in this as well.

Right now Jupiter is in the fire sign Sag. It is @ that 18 degree mark- and its creating a square relation to the SE point. Jupiter is all about EXPANDING - and unfortunately what is expanding now is a fire across the earth (Virgo) of So. Cal. Los Angeles also happens to be a Virgo Sun city.

The Solar return for LA shows Mars in Gemini- @ 17 degrees- in opposition to transiting Jupiter. Its in the 12th house- and the fuel of this fire is wind ( Gemini is an air sign) very dry conditions, and too much timber that needed to be cut back. Its not that it was an unseen factor- (12th house is hidden house) but it wasn't DIRECTLY dealt with-(ignored) so it has become our achilles tendon.

That same Solar return chart revealed a last degree Mercury (wind again) conj. the IC-(4th house front door) Which is the house astro weather gurus say governs weather conditions. Anything in the last degree means 'everything is about to change' - and that Mercury is also in a tense relationship with Pluto- the death monger of astrology. Something has to die in order for birth- I wish it was just brush- but many peoples life will change forever this week. Many a home will be rebuilt. Death - Birth cycle comes in many forms.

On the 27th Venus in the sky will cross that 18th degree Virgo point. Until then the fires will rage- and we will all be reminded that everything in this world is impermanent, subject to no warning of departure.

A word of thanks to all the firefighters pulling major overtime this week, doing service while trying to side step mother nature's wrath.

marshmallows over the campfire

There's a new moon on the horizon. Sun and Moon unite in the sign of Libra in the evening of 10th Oct. 10pm (PDT).

Calling all peace marchers to do the deed.

What brings you peace? How can you share that? Spread it all over the world like jam on the toast.

Yesterday was John Lennon's 67th. I remember where and when I heard the news of his crossing over- like the generation before me remembers where they were when JFK kissed this world good-bye. Heroes are never forgotten. John Lennon is on my list of Heroes.

How to honor a hero? Live the message they died whispering on their lips- or screaming if the case may be. Libra is known for gentleness, yet no other sign can be as firm as iron- (unseen by the velvet glove)- than air ruled Libra.

Libra is a brain thing- everything journeys through the mind. So if you "think" "peace" as Yoko Ono urged us all to do yesterday, as she gave her late husband and the world one very cool birthday present, perhaps it will go from our brains into the heart (Venus is the planet ruling Libra) or Heart to Brain- who cares- just connect the two and go forth and populate the world with Peace.

If you haven't seen the light blasting - ck it out:

As for the title of this blog- I remember being a young child watching sugar in the form of a soft white square on the end of a stick turn brown and drip into a fire on top of the earth- it brought me peace- joy- fun.....( this memory was triggered while putting my head through my legs (yoga-duty) and seeing the word 'marshmallows' on the unpacked box in my living room- ah the mind) ...... so with this new moon - remember the joys in your life - recreate them. Share them- and remember:

peace begins with me and you.

Thanks John and Yoko for never giving up.